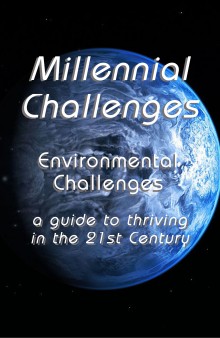 Since the 1970s, there has been an ever-increasing drum beat of alarm messages about our environment. Initially it was focused on ordinary features like litter, pollution, and smog. But as momentum grew it shifted in intensity and scope to include other areas, the majority of which few people had ever considered or even heard of. Now we had gone from smog to ozone depletion to global warming.

For over 40 years there has been an ever-increasing drum beat of alarm messages related to our earthly environment. Initially it was simply focused on fairly ordinary features like roadside litter, polluted water, and smog. But as the momentum grew it shifted in both intensity and scope to include many other areas, the majority of which few people had ever considered or even heard of. In addition, the foreground issues moved from local problems to regional and eventually to global ones. By the year 2000, we had gone from smog to ozone depletion to global warming.

Now there are all kinds of focal points, but most of the high-profile ones are in some way related to global warming and its consequences on climate and ultimately human life. The debate over whether it is actually happening has just about been settled. It isn’t a mirage. There are still many discussions ongoing (and they are energetic, to say the least) as to just how bad things are and what we need to do about it.

In the next ten chapters we will explore the most important aspects of this arena, and try not only to make sense of where we are today and how we got here, but what we should expect in the decades, or even centuries, to come.

Greenhouse gases and global warming
In this chapter you will find the basic facts about the greenhouse effect, its pitfalls and solutions.

Sustaining our food chain
Every living thing is dependent on a chain for food, and humans, who are at the top of the food chain, are no exception. Here we explore the intricacies of our food supply and the important factors that may affect it in the future.

Waste disposal
People create waste and they always have. The more people, the greater the challenges of handling their waste.

Nuclear waste
This type of waste is the most enduring, dangerous, and pernicious. But it also offers many seeming benefits. What are the real facts concerning nuclear power, and what are our best alternatives for the future?

Development of sustainable energy sources
There is much talk about specific alternatives to fossil fuels, but seldom does anyone make an umbiased comparison between all the frontrunners at one time. Here, we do.

Better engineering against natural calamities
Better engineering is one of the surest ways to at least limit, if not prevent, damage from natural events. The strengths, weaknesses, and progress of these technologies are discussed here.

Better damage control methods after disasters
Once disaster has struck, how can we best recover from it? Are we getting smarter, and if so, how?

Endangered species
What are the facts about the disappearance of entire species from the Earth? Whose responsible? How does the future look? What can we do to make it better?