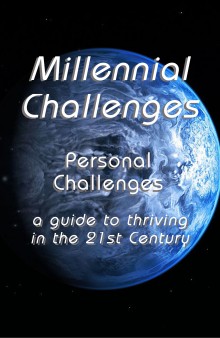 This is the first in a series called collectively The Millennium Book. It contains the Introduction, the full text of the first of ten modules, and contains ten chapters on subjects related to the Personal Challenges we will all face in the new century. Next, there are summaries of the remaiing chapters in the other modules. After reading this material, you should feel better about the new era.

Here at the trailhead of the third millennium, there is a great deal of uncertainty about where our world is going. What are the rules of this new game? What should I expect? What will be expected of me? But there is one thing that is absolutely certain:Change is occurring at breathtaking speed, and it is accelerating at an unprecedented rate.This fact can be seen as exciting, powerful, wonderful, confusing, or terrifying. It all depends on your point of view. Yet who among us has received as much instruction on dealing with ever-accelerating change as we have on tying our shoes? It’s never really mattered before, because it has never happened before, not with today’s intensity. It is up to each one of us to educate ourselves on how to adapt to this irresistible force: the acceleration of change. The first big question is simply where to begin.In his landmark best seller of the early 1970s, Future Shock, Alvin Toffler says:”It is the thesis of this book that there are discoverable limits to the amount of change that the human organism can absorb, and that by endlessly accelerating change without first determining these limits, we may submit masses of men to demands they simply cannot tolerate. We run the high risk of throwing them into that peculiar state that I have called future shock.

“We may define future shock as the distress, both physical and psychological, that arises from an overload of the human organism’s physical adaptive systems and its decision-making processes. Put more simply, future shock is the human response to overstimulation.”

One of the difficulties in adjusting to the new rate of change lies in our ability to anticipate future events and trends accurately enough to keep them from overwhelming us when they arrive. We have all developed a certain amount of skill at predicting emerging events, some of us more so than others. Yet whatever skills we may have acquired, whether great or small, are almost always dependent on one assumption that is usually quite invisible, because it has always been true. It is that change occurs in a slow and linear way. In other words, the degree of change of something in one year (or even one century) is about the same as it was in the last similar period. This assumption has been quite reliable for centuries. But not anymore. Perhaps never again.

It should come as no surprise, then, that in recent years the word “disruptive” has come into common usage to describe an innovation whose effect on the status quo is so powerful, so profound, and so immediate, that it utterly disrupts the established order. Though some natural disasters have had such an effect, at least regionally, in the past, a global disruption has not occurred suddenly since 65 million years ago when a projectile from space hit the Earth causing a night that lasted long enough to wipe out the dinosaurs. Yet never before, since the first ape walked upright have we or any of our ancestors done anything that had the profound and immediate impact on human life that technological innovations have today. The atomic bomb was probably the first; not so much its existence, but its actual use. Is it any wonder, then, that we have had to press into service an old and well-used word to describe something that has never before happened. And that may be the most telling evidence of all that the times aren’t the only things that are a changin’.

This book is organized into ten modules by subject matter, explores the new millennium from the standpoint of the past that led us there, the present state of our human world, and the future that seems most likely to evolve. It is not a doomsday account, but rather a sane, reasoned approach based on deep insights applied to available facts.

If you’d like to read this book at no cost, just tell us the email address you want the download instructions sent to, and it’s yours!

Where do you want the instructions for your free download sent?