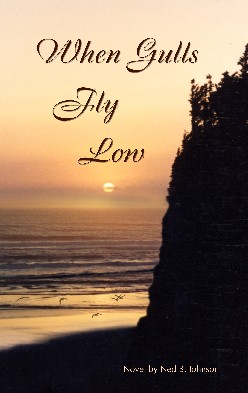 of When Gulls Fly Low?

A novel by Ned B. Johnson

This extraordinary book is a love story and much more. It delves into metaphysics, lucid dreaming, and personal transformation through spiritual growth. When Gulls Fly Low? is a brilliant,
eclectic read that seeks to awaken the sleeping wisdom within us.

In case you aren’t familiar with the term, lucid dreams are those in which you become aware that you are dreaming while still asleep. Once this happens, you can alter the course of dream events as you wish.

This book relies heavily on dreams, both ordinary and lucid, and is reminiscent of the Seth material by Jane Roberts as well as the works of Carlos Castaneda, Richard Bach, and other modern
metaphysical writers.

Ned Johnson spins his tale beginning in the middle of the story where the main character, Henry, sits watching his new bride who is in a coma. We are then led back in time, introducing each character with a precision known only to  one who has been there.

Though the characters are not connected at first, as the story unfolds, the connections are revealed, and together they live a tale that is at once amazing and profoundly true. Johnson’s style reminds me of Steven King, who always introduces the setting and characters first, leaving us to wonder how they are connected.

As the story progresses, the man and the mermaid meet in the real world and fall in love. Too soon, however, she is injured in an accident (or is it an accident?) which leaves her in a coma, but not incommunicado. The shared dreams continue. I’m not letting the cat out of the bag here, because this is all revealed in the first few pages. It’s what happens while she is in the coma that is the meat of the story, and dreams are  an intimate part of that.

Henry is an extraordinary man, and his love of life and others reaches out even to the man who caused her accident.
He possesses no magical powers that others do not, and his life is not without powerful challenges. What is remarkable about him is how he views these events, and how he responds to them. Perhaps a brief excerpt will best illustrate this point.

Henry is talking to his mother-in-law, Josie. They have been adversaries until now, but she has now removed herself as an obstacle in his life. She is surprised that he does not take the opportunity to gloat at having dethroned the old battle-ax.

“I am only trying to be who I most want to be. That is, in fact, how I try live my life. Yes, I could have held a grudge against you. But what purpose would that have served? How could I possibly have benefited from that? It would have created an unbridgeable gap between me and the mother of the woman I love; it would have brought the problems of having to make war with you down upon my new family; it would have brought no joy to anyone on this Earth. How could I make such a choice knowing all of that?”

When Gulls Fly Low is a read that you will not want to put down. It is really romantic, and the characters are believable. They remind you of people you have known, for they are very human. The metaphysics and lucid dreaming are woven seamlessly into the story.

I think Ned Johnson has a book worth reading here. Mythic and masterful, it is a work to be read and re-read. This is exceptional material, most rewarding to read and was a true delight for me–a real page-turner. I encourage you to read it as soon as you can order a copy.