The Nature of Personal Twitterverse 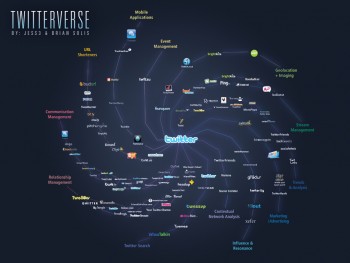 In 1975 Jane Roberts published the second volume of the series that came to be known collectively as “The Seth Books.” It was entitled The Nature of Personal Reality, and it was the closest thing to a combined owner’s manual/Chilton book for human beings I have ever seen. It’s basic pitch was simple: You create your own reality. This was meant to be neither figurative, nor metaphorical, nor symbolic. Rather it was intended to be taken literally and completely as stated. Put even more directly, and in Seth’s own words from his previous book, Seth Speaks, “You have been given the gift of gods: you create reality.” And we do. There are no exceptions. That includes Twitter.

What has become clearer and clearer to me every day lately is how Twitter is probably the best example of creating your own reality in its most literal interpretation of all the social media on the Web. And being a microcosm of the physical universe in which we have our existence, it can but mirror the creativity we express there.

The key, it seems to me, in the nearness of fit between creating a physical universe and creating a Twitterverse lies in the creative process itself. In Twitter, you choose to follow certain people, but you do not choose who follows you: they do. To begin to grasp the importance of this simple fact, consider this possibility: not one single person follows you. That means that no matter what you post on Twitter, no one will know except you. Hardly seems worth the effort, does it. It’s like being a painter in a world where everyone is blind but you. Clearly, your followers are critically important to any possible benefits from engaging with Twitter.

Yes, if you just follow a bunch of people, you might learn something, or buy something, but you would not have much of an impact yourself on anything or anyone else. You would be impotent.

Conversely, if you don’t follow anyone, but you have thousands of followers, you’re equally limited in what you can experience on Twitter. It puts you in a position similar to that in which Beethoven found himself toward the end of his life: he composed music that everyone else could hear, but he could not. Hardly a desirable situation, let alone a satisfying one.

So it seems pretty obvious that the ideal arrangement lies somewhere in between. The variable is the ratio between those whom you follow, and those who follow you. Yet not all Twitterers are created equal, particularly in terms of the ways in which they match up with one another. For the most part there is more value in connecting with someone with whom you share interests, values, or knowledge. So most of us are far better off with those with whom we share the most in common, or with whom we have complementary needs. By that I mean a teacher/student, question/answer or buyer/seller relationship.

But what really intrigues me is that we create our personal Twitterverse by the choices we make. We choose, first of all, to engage with Twitter in whatever way we do. The nature of that engagement casts a tall shadow over all of our related experiences. How much time we devote to it, what we do with that time, how intimately we reveal and share ourselves, and even our basic intentions are all key ingredients in the equation, and all directly affect the nature of our personal Twitterverse.

The people you choose to follow is another massively important dimension. Most of the people who wind up following you will come to you directly or indirectly because of people you are already following yourself. This may be do to a direct referral, such as #followfriday, or it may simply be someone following someone you are following, and looking at those who are also following that person. Then they see you, read your profile, and decide you look interesting.

Another common way people start following is by reading tweets you make that they find interesting, valuable, or intriguing. While you can, and hopefully do, originate your own tweets, many of them probably come in response to the postings of people that you follow. So your choice of those you follow, as well as your responses to them, along with your choices of original posts will have a direct and profound bearing on the number and type of followers you attract. Does this begin to sound familiar?

It should. It’s just the way things work in “real life.” We pick our friends, some of whom pick us in return. But in Twitter it happens at a more anonymous level, which virtually eliminates the element of obligation. There are no serious repercussions of following or not following any one individual. Either you do or you don’t, and that’s pretty much it. In the “real world,” there can be other repercussions. So the Twitterverse is a simpler, more pristine, and far easier place in which to experience a higher level of freedom of choice and action than most are used to.

There are other aspects of Twitter that permit us far greater freedom to experiment than we ever have in our offline lives. We can put new meaning into “being ourselves.” We can experiment with what it really means to be authentic, and we can do it in ways that dramatically exceed any previous high-water marks we may ever have achieved. And when it works, it is a powerful validation of the rightness of our very being. Countless times I have seen people absolutely blown away at the way they are perceived by others, others whose opinion they have come to respect and value, when they expose themselves in ways that they have always wanted to, but lacked the courage to attempt. Twitter gives them that opportunity, whenever they’re ready, and for those who seize that chance and run with it, the rewards can be immediate and inspiring.

When all is said and done, we each create our own Twitter by the countless choices we make, and we see the results of that creation in real time. I do not believe I have ever seen anything that offers anything even close to that kind of opportunity on- or off-line before. It is a tool that is as powerful as it is unlikely, and as popular as it is hard to explain. It’s not unlike trying to explain the appeal of sex to a child: they just don’t have anything within their experience to compare it to. Usually, we don’t even try.

To gain a broader and deeper vision of some of the concepts introduced here, you may want to read one or both of the pieces listed below. Each deals in more depth with some aspect of the creative process or the underpinnings of reality. Meanwhile, enjoy your own personal, private Twitterverse. And don’t forget that you are the only person in any universe who experiences the exact same one.