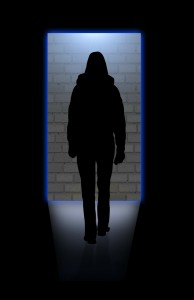 The only thing we have to fear is fear itself
.” Those were the famous words spoken by Franklin D. Roosevelt during his first inaugural address, and while he showed much greater insight than most people, before or since, he didn’t have it all figured out. Not by a long shot. On one hand, fear is much more subtle than that, and at the same time simpler. What follows is, I believe, not so much a matter of opinion, but rather a description of simple observations anyone can make, but few do.

Fear is our emotional response to a situation in which we expect to experience pain. This anticipated pain can be physical, emotional, intellectual, or of any other kind. The next question is, what is expectation?

But a single belief (and the expectations it spawns) does not necessarily lead to fear. It takes two beliefs to produce fear. I call them the Hammer and the Anvil. The hammer is a belief in the dangerousness of something. When this thing is present, it means danger. The Anvil is a belief that we are powerless to defend ourselves from that danger. Only when both beliefs are present are we compelled to expect a losing battle, and therefore feel fear. When you think about it, it’s pretty obvious.

If you believe that someone wants to hurt you, but you are surrounded by a team of commandos who love you, chances are you will feel little or no fear. Why? Because you have a powerful defense surrounding you. Conversely, if you are alone and totally vulnerable, but sense no threats or danger of any kind, you will not feel fear. It is only when the Hammer and the Anvil come smashing together, with you in between, that you feel fear. But not all fear is created equal.

There are four variables that affect the degree to which you feel fear:

The greatest fear comes from an absolute certainty that you are in immediate danger of excruciating pain and you believe you are without any effective defense. The greatest sense of safety occurs when you perceive no threats and/or feel totally empowered to defend yourself. Most of life falls somewhere in between.

Virtually all so-called “negative” emotions grow out of fear. Anger is the simplest example. Show me an angry person, and I’ll show you a frightened person. Anger is one response to perceived threats. Without a threat, no one feels anger. And no one who feels empowered to defend against a threat feels anger. Anger is only felt by those who see a danger against which  they feel they are unable to defend themselves. Ring any bells? Yep. They are frightened, and frightened people get angry.

Hatred is just a specialized form of anger. So are resentment, envy, jealousy, and others. They all have one thing in common: they are a response to fear. And, as we have seen, fear is a response to a pair of beliefs, one in danger, the other in powerlessness.

In our culture, even the word fear has been all but banned in many of the contexts in which it is most present and debilitating. Words like “stress,” and “anxiety,” for example, are used to describe or label a variety of things for which “fear” would be a much more honest, direct, and useful term. You can “deal with stress,” but you can eliminate fear! How? Simple. You change the beliefs that create it.

The beauty of this approach is that these beliefs are virtually always lies. They convince you of threats that do not exist except in your own mind, and they further convince you of powerlessness that is equally erroneous. So they really can’t stand the bright light of day. Why do you think they hide behind words like “stress” and “anxiety?” If you look right at them, you might realize that they are just pure fiction.

Want proof? Of course you do. Here is a challenge. Set a little egg timer in your mind that will go off at least several times a day. When it does, look around and see if you can find a clear and present danger. I don’t mean one that your mind is convinced may be in the next minute, or next room, or the privacy of someone else’s mind. I mean a hungry lion looking right at you from 20 feet away with lunch on its mind.

If you do this, you will find that you never, I mean never ever ever, find any such danger! The truth is that you are safe. Always. The only exception is if you fret about danger and powerlessness so constantly, for so long, that the Law of Attraction has no choice but to answer your insistent thoughts (and emotions). Usually, you are only given plausible evidence that the threats exist. But if you keep at it, every now and then, the danger arrives. However, this is highly unusual, and requires a lot of devotion to create it. As Seth once put it, “the Universe leans in your direction,” meaning that beneficial thoughts are given more weight than harmful ones.

So when you hear words like stress, and anger, and hate, know that what is really being addressed is fear, and that behind that fear are beliefs that demand it. If you would change the outcome, you must change the beliefs that create it. Nothing else will do.

One more word should be introduced here: peace. Peace is what you get when safety is a root assumption, and it is all there can be when no beliefs in danger or powerlessness remain. And not one nanosecond sooner.